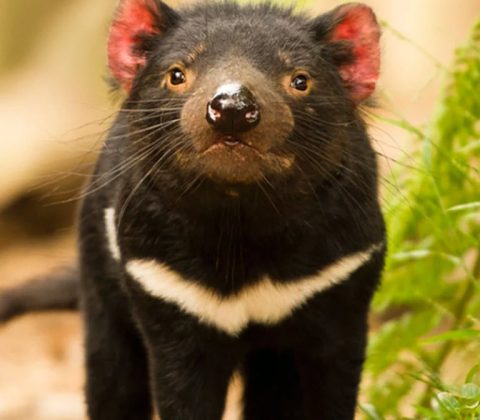 With Tasmanian Devils (Sarcophilus harrisii or S. laniarius) in dramatic decline from a transmissible tumour called Devil Facial Tumour Disease or DFTD, three major companies are helping fund needed programs based at the University of Tasmania and overseen by the Tasmanian Department of Primary Industries and Water (DPIW). The multi-faceted approach includes field monitoring of the wild population, research into the disease itself, efforts to mitigate the impact of the disease on the wild population and captive management of ‘ark populations’ of Tasmanian Devils. Warner Brothers, whose Taz, the Tasmanian Devil introduced the animals to many people; MaxValu, a Japanese supermarket chain and Qantas Airlines are all contributing.

The Tasmanian Devil is listed as Vulnerable by Australia and Tasmania under the Australian Environment Protection and Biodiversity Act, largely due to the DFTD outbreak. DFTD begins as cancerous lesions around the mouth and head, which grow rapidly and spread down the neck, often onto the body, very quickly. Death usually occurs within 8 months of the first lesions appearing. The tumour cells are passed directly from animal to animal so the project is looking at ways to separate populations to prevent further spread of the disease. In areas that are DFTD free work is being done to prevent inward migration. Cattle grids are being tested to find optimum design to discourage the Tasmanian Devils from infected areas from crossing bridges into clean areas. Other options being explored include sensors mounted at devil eye level that trip lights, barking dog sounds or water jets.

In addition to attempting to check the spread of the disease to healthy wild populations, a number of Devils were taken into captivity in 2005 as part of an ‘insurance’ program. The animals, kept in a quarantine facility since then, continue to be disease free. Some have bred successfully. Some of the animals from the quarantine facility will be sent to authorized mainland wildlife parks, so that all of the ‘insurance animals are not in one place.

Warner Brothers has just agreed to donate 1 AUD for each Bugs Bunny and Daffy Duck DVD sold in Australia. This comes less than a year after they authorized the sale of some Taz ,the Tasmanian Devil plush toys with proceeds going to the project. MaxValu from Japan has raised 30,000 AUD and Qantas has provided air transportation for relocation as well as donation sculptures for placement at airports and various other locations around the country. But this is a huge project with implications for the overall biodiversity of Tasmania which means much more funding will be needed.